Around the 4M World 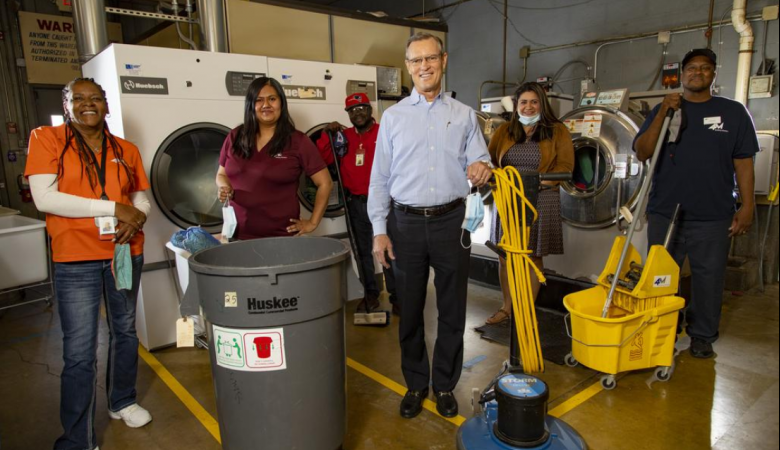 4M Building Solutions has become a giant janitorial services firm, with 4,000 employees in 16 states, including at its corporate headquarters in St. Louis. But the company started small.

A Columbia, Missouri, ice rink venture from Mitch Murch Sr. soured during the energy crisis of the 1970s, said his son Tim Murch.

Mitch, who then owed “a couple million dollars,” was advised to file bankruptcy, but instead sought to repay debtors, Tim said. Mitch, then 50, returned to a former business venture — cleaning — with an initial customer, property management company Nooney.

Tim joined the firm, which launched in 1978 as Mitch Murch’s Maintenance Management. Mitch “had a tremendous amount of gusto and was the kind of guy who walked into a room and everyone gravitated toward him,” Tim said.

A first acquisition came in 1995, via Professional Maintenance in central Illinois, followed by a string of others: Mid-America in Kansas City, and more in Indianapolis and Florida. San Antonio saw organic growth. Other markets include Nashville and Bloomington, Illinois.

Five years ago, the company was stuck at around $50 million in sales. Tim heard a seminar speaker use the term “moonshot,” and decided that was the outlook 4M needed. It targeted $100 million in sales over seven years, and has already achieved that goal, he says, by focusing on markets where it’s already operating and targeting prospective accounts, plus growing business with existing customers.

“That discipline as opposed to just going anywhere and everywhere, along with our market segment focus of who we’re going after and what we’re going to be, has been a huge success,” he said.

Tim attributes efficiency to a strong workplace culture. The company, he says, looks to repeatedly recognize workers’ successes. If employees get compliments, Tim says he writes them thank-you notes.

4M also crafts “clean paths” for each job, a proprietary system that spells out how to do each job well and quickly. “You’re going to engineer a route for a general cleaner, restroom cleaner, floor tech, project specialist, so that they’re moving through that facility as efficiently as possible, eliminating bottlenecks,” he said.

Still, labor is always the company’s biggest challenge. It looks to be competitive with wages, as Amazon and other big firms often raise pay. When the pandemic hit, Tim said, he looked to recruit restaurant and hotel workers for 4M positions. Then, federal unemployment supplements kicked in.

“It’s about three or four times worse now” than pre-Covid, when unemployment levels were at record lows, Tim said.

Now, the company is targeting $150 million in sales by 2025, using a similar strategy utilized in the “moonshot” push.

Tim is the only family member currently involved in the business, which he purchased from his father in 1990. Mitch Murch died in 2014, and the company was renamed the same year.

You can find the original article from the STL Business Journal here.